After the heartbreaking Partition of Bengal in 1947 , when one nation was divided between two Hybrid Religious based Test-tube Nation ” India and Pakistan ” The MV Modhumoti sailing towards its native water , The Cruise from Dhaka to its Sister City Kolkata . The land and water Is Native to the people but divided by imposed boundary called International Border . 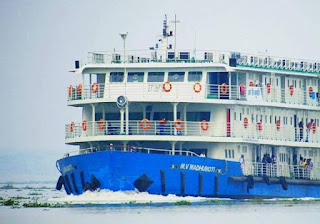