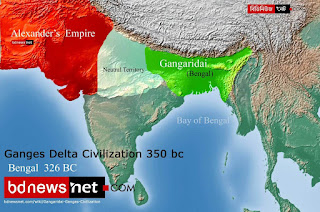 Answer: Bangladesh is a Developing country in South Asia & One of the oldest Nation State in the world. Its a Major exporter of Textile and have the Longest sea beach i the world. “Bangladesh” means ‘Country of Bengal’ or ” Country of Bengali People” . Its Population is 180 Million . Bangalis are the  third largest ethnic group in the world . Bangalis are native to the Bengal ,Ganges Delta from Anicient Times .Alexander the Great and Greek Scholars identified The Anicient Bengal as ” Gangaridai” or The people Lived in Ganges Delta . Greek Historical text describe that Alexander withdrew from the South east Asia, anticipating a counterattack from Gangaridai .