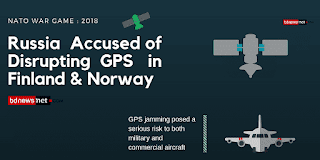 efense and civil aviation chiefs in Finland and Norway warned that the GPS jamming posed a serious risk to both military and commercial aircraft using the affected airspace in the High North.

– Russia’s Ambassador to Finland Pavel Kuznetsov has been summoned to a meeting on Monday with Finnish state secretary Matti Anttonen over the disruption of Finland’s global positioning system (GPS) signal during recent NATO war games.