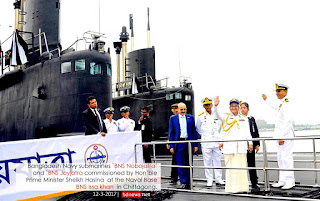 In order to further intensify surveillance in the  Bay of Bengal and enhance the force’s combat capability, Bangladesh Navy on December 22 received the two China made submarines.Earlier on November 14, Rear Admiral Liu Zizhu on behalf of the Chinese government handed over the submarines to Chief of Naval Staff Admiral Mohammad Nizamuddin Ahmed at a ceremony held at Liaonan shipyard in China. She also said