Worst so far’: Trump ‘hangs up’ on Australian PM 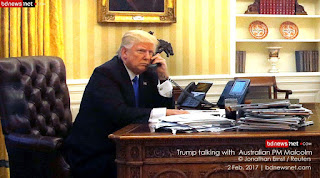 Trump had described the Saturday phone call with the leader of Australia, which had been scheduled to last 60 minutes but reportedly took less than half that, as “the worst so far,” the Washington Post said, citing unidentified senior US officials briefed on the call.

Trump said he was “going to get killed” politically, accusing Canberra of an attempt to export the “next Boston bombers,” the newspaper said.

According to the Australian Department of Immigration, there are 383 detainees on Nauru and 871 on Manus in northern Papua New Guinea.