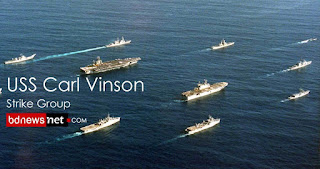 President Donald Trump may reverse an Obama administration by challenging Chinese claims in the South China Sea. After taking the presidency Donald j Trump want to re shape the relation with china in many ways . In recent actions he sent  USS Carl Vinson (CVN-70)  the third United States Navy Nimitz-class supercarrier in south china sea for a tour .