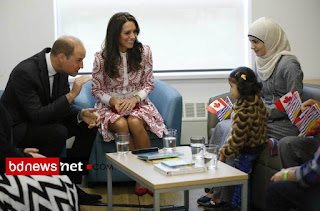 VANCOUVER, British Columbia — Prince George and Princess Charlotte stayed behind with their nanny as Britain’s Prince William and his wife, Kate, continued their tour of British Columbia on Sunday, a day after George left Canadian Prime Minister Justin Trudeau hanging on a high-five.

The 3-year-old George made headlines in the United Kingdom when George declined to high-five and then shake the hand of Trudeau during the arrival ceremony Saturday at the airport in Victoria, B.C. The prime minister was among several dignitaries waiting on the tarmac to greet the royals when they emerged from their flight. Videos and photos of the interaction were shared widely by British media.