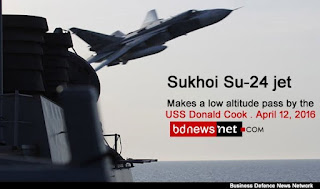 Poland’s former president and democracy icon Lech Walesa said he would not hesitate to “knock off the wing” of Russian jets if he were in charge of the US destroyer Donald Cook.
“If I were the commander of this ship, if these [Russian] planes were flying I would shoot them. But not to kill. I would knock off the wing,” the Nobel Peace Prize recipient of 1983 told Radio Free Europe.
Read More