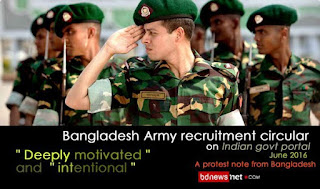 n june 2016  According to ISPR, www.karmakshetra.org, which mainly publishes advertisement on Indian government jobs,  published an advertisement in English about soldier recruitment in the Bangladesh Army.