‘Stay away from Russian borders or keep transponders on’: Russian MoD on US spy planes in Baltics Russian Defense Ministry suggests US surveillance planes should either keep their distance from Russian borders while performing flights over the Baltic Sea, or at least keep aerial transponders switched on for identification.
“There are two solutions for the US Air Force [operating in the Baltic Sea]: either do not fly near our borders, or turn on transponders for automatic identification by our radars,” Defense Ministry spokesman Major-General Igor Konashenkov said in an official statement on Saturday.

The statement comes after a Russian fighter jet intercepted a US surveillance plane, which was spotted in international airspace above the Baltic Sea on Friday with the transponder switched off.
“The RC-135U reconnaissance plane is frequently trying to sneak up to the Russian border with the transponder off. Our anti-aircraft defense has to order our fighters off the ground simply to visually identify the type of aircraft and its ID number,” Konashenkov explained.
Read more 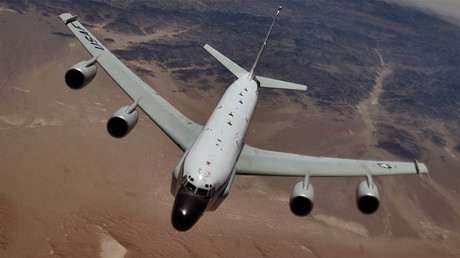 ‘Erratic & aggressive’: Pentagon protests Russian interception of US spy plane
A Russian Sukhoi Su-27 performed a barrel roll within 25 feet from the US plane, with the Pentagon describing the move as “dangerous” and “unprofessional.”
“We are already starting to get used to insults coming from the Pentagon regarding the alleged “unprofessional” maneuvers when our fighters intercept the US spy planes near Russian borders.
Yet, all flights of Russian aircraft are held in accordance with international regulations on the use of airspace,” Konashenkov states, adding that another reconnaissance aircraft  Boeing OC-135B – has landed in Ulan-Ude earlier on Saturday under an international “Treaty on Open Skies,”  and “no one raised the fighters to identify it.”
Fifteen days prior to this latest incident, on April 14, another Su-27 fighter jet conducted a barrel roll over another US reconnaissance plane, and between April 11 and 12, the USS Donald Cook ship was flown over by Su-24 fighter jets, with the Pentagon releasing footage.
The deputy head of Russia’s Upper House committee for defense and security Frants Klintsevich commented on the frenzy over the latest incidents in Baltic airspace, saying the fizzbuzz has a clear goal – to put a smokescreen for NATO plans to deploy additional troops in Eastern Europe.
READ MORE: NATO to send 4,000 troops to border with Russia - report
“It is now completely clear why the United States needed a hype around the interception of the US spy plane over the Baltic Sea and the incident with the destroyer Donald Cook.
It was to prepare the information space for deploying four additional NATO battalions to the Baltic region […] On the tip from US, the North Atlantic alliance continues its strategy of encircling Russia,” Klintsevich said, as quoted by his press service. He also noted that the turmoil began immediately after the latest Russia-NATO Council meeting, throwing into question the expediency of such gatherings.
Moscow has been unhappy with the NATO military buildup on Russia’s borders for some time now, with Russia’s envoy to NATO Aleksandr Grushko stating that Moscow would definitely compensate militarily for an “absolutely unjustified military presence.”
According to the 1997 NATO-Russia Founding Act, the permanent presence of large NATO formations at the Russian border is banned. Yet some voices in Brussels are saying that since the NATO troops stationed next to Russia are going to rotate, this kind of military buildup cannot be regarded as a permanent presence.
International
Location: Moscow, Russia