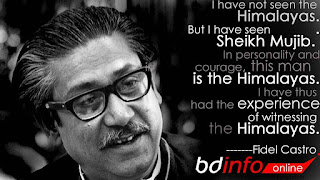 Sheikh Mujibur Rahman was the leader and Statesman man who successfully Declared the independence of Bengal after 214 years of foreign occupation. He was born on 17 March 1920 in “Bengal presidency “ of “ British Raj “ currently Bangladesh.He was a statesman, a hero, and martyr who will be remembered in world’s history for his courage and as a modern founder of a 4000 years old Bengal civilization in 1971.